Melksham is a small to medium sized town¬†and has a long history.¬† Originally a ford across the river Avon and a Saxon settlement, it is believed the name derives from Meolcham, ‚ÄúMeolc‚ÄĚ being the old English name for milk and ‚Äúham‚ÄĚ a village. ¬†The area has long been associated with dairy farming and pasture. It remained a village for many years during which it has had its fair share of royal property owners, villains and entrepreneurs.¬†

At the time of the Norman Conquest Melksham was part of a royal estate.¬† In 1086, William I instigated the survey known as the famous Domesday Book. In it Melksham was described as having 8 mills, 130 acres of water meadows and 8 leagues of pasture in length and breadth.¬† There were 189 landowners, 19 ploughmen and 35 serfs included in a population of several hundred.¬† 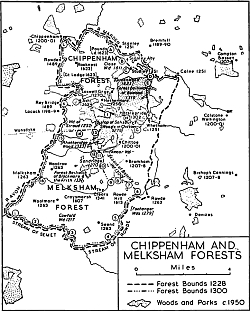 Adjacent to the cultivated land was a Royal medieval forest which, combined with Chippenham Forest, covered 33 square miles.¬† It extended from Calne in the east to Semington in the west and was administered by the Constable of Devizes Castle.¬† William I gave the local manor and lands to Britric Aloeric a descendent of a Norman knight.¬† Today, the name is carried by Aloeric Primary School close to the Town centre.

A Rectory Manor, held in 1086 by Rumold the priest, was held by the canons of Salisbury Cathedral from 1220. This was not a large area, originally being one hide, or about 100 acres, but it was valuable for the tithes that were attached to it. It was leased to many families who were well known locally including, from the 1750s to the 1870s, the Awdreys.

In the early part of the 13th century, King John enjoyed hunting, and as other Tudor kings, often visited Melksham Forest. In 1220 oaks from the forest were used in the choir stalls in the new Cathedral at Salisbury, as part of the parish of Melksham was endowed to support the Canons of the Cathedral.¬† The Abbess and the nuns of nearby Lacock Abbey had the right to a specified amount of wood from the forest, which resulted in the forest being almost completely destroyed by the early 17th century, although the area is still known as Melksham Forest.

In 1219 Melksham was considered important enough to be granted a Charter to hold a market every Friday and a fair on Michaelmas Day.¬† In 1250, the market was transferred to a Tuesday and in 1491 the Prioress of Amesbury obtained a Charter for a two day fair in July.¬† On the second day a fun fair was held and this continued until 1910 when the Home Secretary stopped it. The market continued on Tuesdays alternating with Trowbridge until the advent of the Second World War.

Medieval settlement is likely to have been concentrated in Church Street, Church Walk, High Street and Market Place. Fulling mills were working at Melksham by the 16th century and perhaps earlier so there would have been a small settlement near the river. The main Avon river bridge is first mentioned in 1415 when a sum of money was bequeathed for its maintenance.¬†Lowbourne bridge, is mentioned in 1417. This crossed Clackers Brook, which would have carried more water than it does today.

By the middle of the 14th century Melksham was a busy weaving town, the chief product being white broadcloth.¬† This industry provided employment for spinners, weavers, fullers and shearmen.¬† The wool came from North Wiltshire and the Cotswolds; and the made-up cloth was sent to Blackwell Hall in London and then all over England and the Continent.¬† The woollen trade, disrupted by the Civil War in the middle of the 17th century, later recovered and began making coloured cloth in the dyehouse near the bridge. In 1726 the piece rate paid for the cloth was so low that it was impossible for the weavers to earn a living.¬† Their application to the magistrates for relief was refused and troops were called in to disperse the rioters.¬† Conditions did not improve and in 1739 Henry Coulthurst, a clothier from Melksham, had his house ransacked, his furniture destroyed and quantities of wool and yarn thrown into the river Avon.¬† Nine cottages as well as Henry Coulthurst‚Äôs grist and fulling mills were destroyed.¬† Eventually the three ringleaders were tried, found guilty and hanged.

By 1838 only two cloth mills remained beside the Avon, both operated by steam power and employing 162 workers.¬† The last working mill, The Matravers Mill, was auctioned in 1888 and is now incorporated into the Cooper Avon Tire factory. (Note the American spelling of tyre.)

The King‚Äôs Arms Hotel in the centre of Melksham was built in 1750 when the toll road route from London was altered, resulting in stagecoaches from London passing through Melksham on their way to Bath, Bristol, Exeter and Devonport.¬† By 1830 there were six coaches each day carrying passengers to London.¬† The Royal Mail and the Emerald stopped at the King‚Äôs Arms, the Royal Blue and the Regulator at The Bear, opposite what is now Union Street, and the Olde Company‚Äôs coach and the White Harte coach called at both.¬† The four coach horses were changed every eight to ten miles so there ws probably stabling for about 50 horses behind these hostelries

The coaching days finished when the railway reached Chippenham around1840 and right up to 1926 visitors the King‚Äôs Arms had its own bus to collect visitors from Melksham station.

The defunct Wilts and Berks canal linking the Kennet and Avon canal with the Thames opened in 1819 and gave Melksham added importance.¬† It ran almost through the centre of town and traces remain such as the Wharf House adjoining the hump that was the canal bridge in Spa Road, and the relics of a bridge at the junction of Forest and Sandridge roads.¬† The canal was abandoned in 1914, and the area was redeveloped.¬† However, there is now a Trust working to promote the reopening of the canal along its whole length, which could mean a new route being excavated around parts of Melksham and then along the River Avon through Melksham.

In 1813 several local gentry who had prospered from the woollen industry, the Awdrys, the Longs, the Methuens and the Phillips formed the Melksham Spa Company with a capital of 7,000 guineas to exploit the chalybeate spring discovered in 1770 to the south of Melksham.¬† A well more than 300 feet deep was sunk and six semi-detached boarding houses and a hotel were built. The Spa was intended to rival Bath but within a few years it had failed.

With the advent of the profitable Great Western Railway from London to Bristol via Chippenham a committee was formed, chaired by Walter Long of Rood Ashton near Trowbridge, to raise money for a line line from Chippenham to Salisbury via Melksham, Trowbridge, Westbury and Warminster, with branch lines to Bath and Frome.¬† Designed by Brunel it was to be known as the Wiltshire and Somerset Railway . The land was acquired, lines were laid and stations were built, all for ¬£1 million, and it opened to the public in September 1848.

Earlier, in 1846 the railway contractors erected workshops in Melksham. The Cheese Market, built in an orchard acquired from the owners of Place House by the Melksham Market Company, was a particular attraction. (This building was later to become the Town Hall.)

The 19th century saw the growth of many industries in Melksham.¬† In 1803 Charles Maggs bought a former cloth mill adjoining Spa Road and used it for making rope, matting and tarpaulins.¬† A subsidiary factory was built at Alleppey in southern India, and the business flourished right through two World Wars with two shiploads of matting coir arriving in Melksham every month.¬† It eventually declined and the Rope Walk housing estate now commemorates the business.

In 1850 Benjamin Sawtell founded a business in Challymead, on the Bradford on Avon road, filling palliasses with straw for the army.¬† By 1875 he had moved to a disused cloth factory in the Town.¬† In 1892 he began purifying feathers for pillows and eiderdowns.¬† Feathers were imported from all over the world and in the 1960s it was one of the largest feather firms in the country.¬† Unfortunately man-made fibres began replacing feathers and the Weavers Croft housing estate was built on the site.

Today, one of the the largest employers in Melksham is Cooper Avon Tires, previously Avon Tyres, a rubber company in Limpley Stoke between Bradford on Avon and Bath, making special parts for the booming railway companies.¬† In 1890 it took over the last cloth mill in Melksham, the Matravers Mill alongside the river Avon and changed its name to the Avon India Rubber Company.¬† The factory buildings now cover more than 28 acres.¬† It was taken over by the American tyre company Cooper at the turn of the century.

Melksham is well known to many members of the Royal Air Force who learnt their trade at RAF Melksham, which at its peak accommodated over ten thousand personnel.¬† The official title of the station from when it opened in 1940 until it closed in 1965 was No.12 School of Technical Training.¬† Many local people remember seeing aircraft on display at the annual open days, but it was never an operational flying base because it had no runway.¬† The aircraft were used for training purposes for ground crew and technicians and were dismantled before arrival and departure.

The station also housed No 10 School of Recruit Training and it averaged an intake of 100 a week of mainly National servicemen until August 1953 when the last trainees passed out and the unit closed.

Melksham remains a bustling and friendly place true to its proud trading traditions although housing estates have extended the town‚Äôs limits.¬† The original core alongside the ancient parish church of St Michael still survives as a corner of quiet charm.¬† The church carries traces of Norman work and there are some interesting tombstones in the churchyard.